There is some discrepancy in my family regarding exactly who came up with the idea for me to start violin lessons at age 5.  I guess when something turns out to be such a good idea that everyone wants to claim responsibility for it, it doesn’t really matter who wanted it first.  We can all agree, however, that we owe a thank-you to the Reyes family.  My little friend Kim Reyes brought her violin to show and tell one day and without that demonstration, we might not have known that very small children playing very small violins was even possible.  I remember watching her play her little violin with eyes of wonder.  At that time I had no idea such a strange instrument even existed.  It looked so awkward up there on her shoulder!  Who came up with that idea for how to play an instrument?!  So far my instrument experience had been limited to guitar and piano.  I remember wondering if it was possible that I could play such a bizarre instrument like the violin.  It looked hard.  I liked that.

Months later, I got my first violin. I was so excited to start playing that I would creep out of bed to open my violin case and gaze at the instrument.  There were strict rules regarding how much I could touch it without grown up supervision (touching the instrument on my own was forbidden for at least the first few months of study).  I was terrified to lift it out of it’s case at those moments but I loved to look at it.

I started violin in a Suzuki program run by a Nun, Sister Noreleen Rettinger, at Mount Mary College in Milwaukee.  My Mom was my practice partner and played the piano with me through the first 4 or 5 Suzuki books.  As a grade school teacher (not a professional musician) and mother of 3 girls, she had to fit in her own practice but this often inspired me to practice.  I remember many days of happily playing in my room, hearing her play my pieces on the piano, and feeling very jealous.  I would think, “ARGGGG! She’s playing MY song!!”  I would begrudgingly stomp out to the piano, get my violin out, and play along which led into practicing.  She says she does not remember any fights regarding our practicing but I do!  It’s so hard to hear criticism from your Mother no matter how constructive!  It always felt like she was telling me she did not love me which made me not want to hear it.  But learning to value that criticism, recognizing it as support, and not equating it with love is a major life lesson.

When I was 11, Sister Noreleen, who was my teacher at the time, passed away.  I was just about to start Suzuki Book 7.  At this point I switched to a more traditional teacher who performed with the Milwaukee Symphony.  I remember thinking he was incredibly picky, easily agitated, and half the time I had no idea what he was trying to get me to do.  Sometimes he would run 45 minutes over our hour lesson time with me (even though I was melting inside).  I studied with him until I went to college.  But that’s a story for another time!

Here’s a little Q and A with my Mom regarding the early years:

Q. Did I always like to practice? If not, did you have any tricks that made practice easier?

I don’t remember using any bribes to get you to practice. You did what was expected of you, and if you skipped a day or so, it was okay. You worked very hard on your practicing.

Karolyn’s Response: I did NOT always like to practice although I have to say, I usually did enjoy it once I got going. Listening to music always inspired me to practice.

Q. Was there a point when it became clear to you that it was all worth it?

Karolyn’s Response: I think what my Mom is trying to say here, is that when your child starts to learn vibrato, you may seriously consider some very creative ways in which the violin might have an “accident” and you just might be too busy to ever find the time to replace it BUT take heart! Mastery will be achieved! Eventually!

Q. What helped keep us going through the years?

What helped me through the long days of practicing and getting to lessons and group, and tackling the recitals, and paying the big bucks, was remembering myself, and how even though I didn’t practice a lot, my parents kept paying for my lessons and encouraging me to continue. As I matured, my talent matured, so that one day, after playing many scales on the piano, I could suddenly sight read – that led to being able to play for my school classes, for chapel services, play for and direct school musicals, and to join choirs like Bach Choir. I could see you maturing and always progressing, and knew it was good to keep going with it all.

Q. What kind of practice habits did we have?

I kept practice time at a regular time and as brief and painless as possible, knowing every little bit was helpful, in the long run, and not wanting you to develop a hatred for it. I was not terribly picky about things as you didn’t need too much of that and your teachers did that. You never asked to quit and I think that was because you were successful at the recitals and were getting lots of praise and you could see where you were going with it. You picked it up fast. I trusted your teachers to move you along at the right speed.

Karolyn’s Response: I would like to add that “successful” at recitals did not mean performing my pieces without mistakes or to someone’s definition of perfect. I definitely did not do that! I knew it, too! I learned that working up a piece and communicating the music in front of an audience was part of an important creative process. The people around me made me feel successful for just having gone through the process. What I later realized was that just to take part in the process again and again was building fundamental life skills. I set an intention, worked hard, and saw the project to completion.

Q. What’s the best time you remember having with me surrounding music?

Probably the best music time I remember having with you was when we were in group recital together and I was playing piano and you were playing violin. All those times when we could play together were very special.

Karolyn’s Response: YES! I agree! I am so grateful for the experiences we had playing music together. Those experiences helped me form a love of ensemble playing from the earliest years. 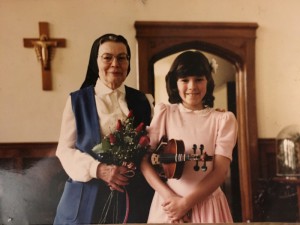 Practicing help and other timely info ~ Our Blog